Welcome to the world, little London Underground Comics.
It's the brainchild of Oli Smith, and is really the rebranding (what a hateful word) of the Camden Comics Stall. Which, as you all recall is a new initiative down at Camden Lock market to get comics from the creators into the hands of the general public. It highlights the sheer diversity and brilliance of some of the comics being produced right now.

Joe at FPI blog has an interview with Oli here.

Oli's looking like a little Paul Gravett right now, setting up his own version of the Fast Fiction stall from over 25 years back. And he seems to be doing it for exactly the same reasons.

Enter Camden comics alternative. A stall that sells comics to people who are looking for something new and most of whom don’t realise non-spandex comics exist. With a regular turnover of different punters, a fantastic social atmosphere and with sale figures that mean, not only does it require no investment, but it also turns comics from an expensive hobby for people with spare cash kicking around to, at the bare minimum, a past-time that pays for itself. Why spend £80 on a table at a convention selling to the saturated market of people who came last year, when you can spend £2 on rent and sell ten to twenty copies each week as well as getting to spend time with fellow comics-creators.

I tout the stall as non-profit making cooperative, with me only taking the money from wares of my own (I kick myself every day for saying that I would do that), but it just goes to show what you can achieve without ANY investment whatsoever, and if we can do that, so can everybody else. We hope to lead by example and if I had a few grand kicking around I could have easily done something more spectacular (the world’s first small press comics shop- not far away now, mark my words), but would it have inspired as many people to come and join in?

Having broken the thousand comics sold mark a month ago, (that’s three months after opening for people counting), never having failed to make the rent, with deliveries of new stock at least twice a week and the idea of a permanent second table being kicked around as well as branching out to Spital Fields Market, it can’t get much better (oh did I mention ALAN FRICKING MOORE?!).

So it seems that we have a new movement starting up. It's going to be really interesting to see how it all turns out. After all, we know what happened to the last lot of young bucks running a comics stall don't we? 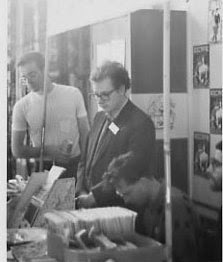 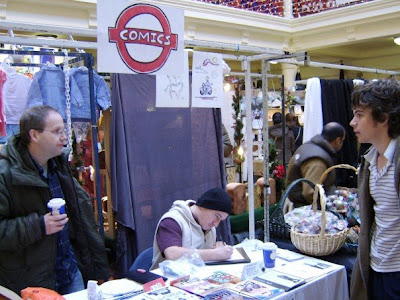 The London Underground Comics Website.
London Underground Comics on Facebook.
The FPIblog interview with Oli Smith.
Oli at You Tube - including the Alan Moore endorsement.
Fast Fiction pic via Comic Reader archive.
(update - according to Eddie Campbell - and he should know, being in the pic after all - it's from a Fast Fiction appearance at UKCAC 86 and thinks the photographer was Phil Elliot.)
Posted by Richard at 1:27 AM