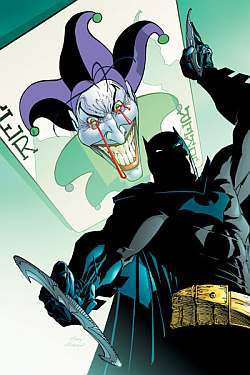 In this 20 page illustrated prose story, Grant Morrison has managed to confuse, bewilder, excite and entertain, all in one little novella.

It’s a simple Batman vs. Joker vignette, with HarleyQuinn as a supporting character. Not having read the preceding issues, I’m a little in the dark, but from what I can gather Joker was shot and seriously injured previously and he’s been recovering in Arkham Asylum. His personality is changing to something simpler and more directed - the clown really isn’t laughing anymore - and has decided to wipe out his previous henchmen, using Harley as his weapon.

Like most Batman & Joker stories this follows a fairly simple pattern: Batman & Joker as reflections, dancing around each other, inexplicably drawn to the other, slowly moving together as Joker casts out clues and Batman is drawn in. Harley, Batman and Joker come together at the end as the new, nastier Joker reveals his grand plan and Harley finds she’s just another part of Joker’s unwanted past. Of course, we know how it will end up; with Joker carted off to Arkham again, it always does. But it’s not a story of surprise endings; it’s a story where the dance is the thing.

And possibly, particularly early on, Morrison gets a little too carried away with his own author’s dance. His opening few pages are overly wordy, too obsessed with creating overarching purple prose. And this seems to be why most reviews of this issue I’ve read are positively vitriolic. Generally, people hated this issue, but I really can’t agree. Part of me can see the flaws; it is overwritten and it feels like Morrison is playing with the language; whether that’s a deliberate nod to the prose genre or bad writing I’m not entirely sure. My love of Morrison’s writing up till now means I instinctively give him the benefit of the doubt though.

But after these first few problem pages Morrison loses some of the purple prose and settles into the story and allows a sense of anticipation and suspense to build. From this point, I can’t really fault the book.

James Van Fleet’s artwork is a curious mix of paint effects and computer design. It’s strangely modern yet also looks in parts like it could have been drawn sometime in the 1980s, so bad is the computer rendering. But despite that it does alright; doesn’t necessarily add much to the story, but then again, since it’s a prose story anyway, what’s the problem with that? It’s pretty but doesn’t always work.

Obviously the parallels with Morrison’s other major Batman work; Arkham Asylum, overshadows much of the book but this is a different Morrison; much tighter and capable of producing masterful Superhero books like All Star Superman. Perhaps his Batman isn’t up to the standard of that book, but it’s certainly nowhere near the catastrophe that so many have reported. I enjoyed it, flaws and all.

(Originally posted at PROPAGANDA on the FPI weblog here)
Posted by Richard at 11:51 PM