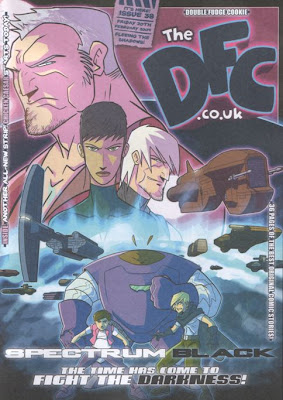 It's Friday and the red and yellow bundle dropped through the letterbox earlier. This means it's DFC day. For those of you not up to speed on this, the DFC is a subscription only UK children's comic featuring 36 ad free pages of fantastic comics. Comedy, adventure, single gag strips, continuing series. The DFC has the lot.

Issue 38 sees the start of new sci-fi adventure Spectrum Black. Which looks rather like a Ben 10 cartoon but does so in a good way - not appealing to me, but Molly thought it looked good (and that's the point of a children's comic - to actually appeal to children). There's a preview page here to give you a flavour of the thing.

Elsewhere there's another new series starting without the fanfare of Spectrum Black: Chicken Caesar Junior by Julian Hanshaw. A nice enough comedy about the son of the greatest chef in the world. The only Julian Hanshaw I can find online is the winner of the 2008 Observer/Cape Graphic Short Story prize with Sand Dunes and Sonic Booms but I don't think it's him: 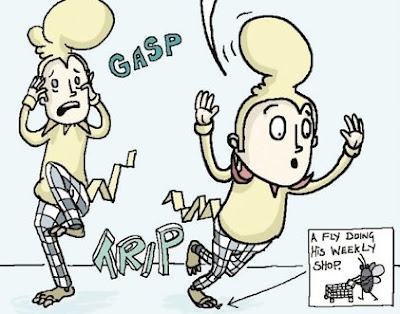 Update, merely a couple of hours later: It is the same Julian Hanshaw. Just working in a different style. Thanks to Julian for getting in touch with the info. He also writes that he's:
"currently finishing of a Graphic Novel called 'The Art Of Pho' which is set in Ho Chi Minh City and revolves around the food of Vietnam. To be published by Jonathan Cape"
Sounds very good after the incredible promise of Sonic Booms and Sand Dunes.

As for the rest of the comic, by now you should know what we like! Gary Northfield's Lil' Cutie, Sarah McIntyre's Vern & Lettuce, Simone Lia's Sausage & Carrots, James Turner's Super Animal Adventure Squad, Wilbur Dawbarn's Bodkin and the Bear all got big smiles and chuckles from both of us.

No Mirabilis or Mezolith this issue though, hopefully they'll be back soon. But the best news of the week, one that elicited huge cheers from Molly is the return of Jim Medway's Crab Lane Crew in 2 issues time. A very happy girl indeed.

So, that's this week's DFC. Well worth going and getting a subscription don't you think?
Posted by Richard at 11:26 AM